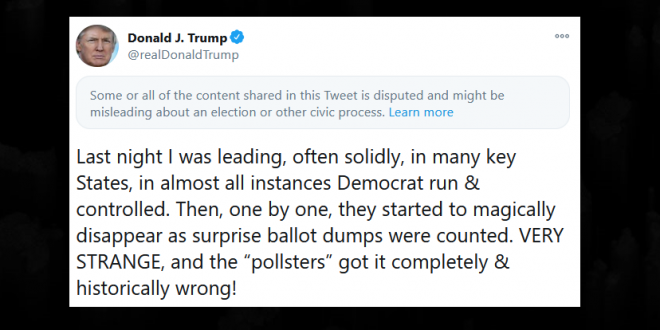 President Trump claimed Wednesday that “surprise ballot dumps” were killing his chances of winning reelection as Joe Biden edged ahead in key states. After prematurely claiming victory after midnight, Trump angrily accused Democrats of engineering a massive turnaround while he slept.

Biden took the lead early Wednesday in states that would give him 270 electoral college votes and a victory in the Titanic battle for the White House. Trump cast suspicion on the latest voting results because most of the battleground states are run by Democrats.

The affected tweets can’t be liked or shared.

Last night I was leading, often solidly, in many key States, in almost all instances Democrat run & controlled. Then, one by one, they started to magically disappear as surprise ballot dumps were counted. VERY STRANGE, and the “pollsters” got it completely & historically wrong!

How come every time they count Mail-In ballot dumps they are so devastating in their percentage and power of destruction?

We are up BIG, but they are trying to STEAL the Election. We will never let them do it. Votes cannot be cast after the Polls are closed!