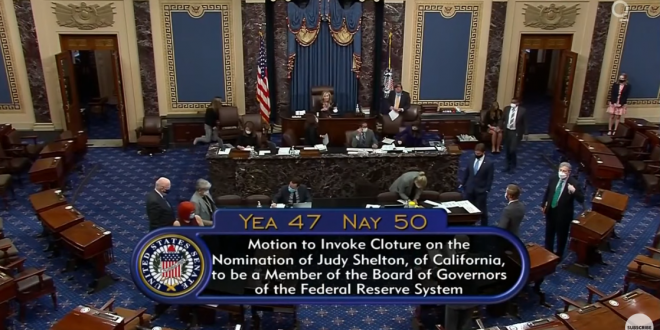 Judy Shelton’s nomination to the Federal Reserve Board of Governors failed to advance in the Senate on Tuesday, jeopardizing her prospects of being confirmed due to a combination of Republican absences and opposition to her installation to the central bank.

We need a reliable Federal Reserve to help manage our economy in this pandemic.

Judy Shelton’s dangerous ideas would devastate our economy, and her lack of commitment to using the full force of the Fed to provide COVID-19 relief is unacceptable.

I voted no on her nomination.

“Shelton is a demonstrably unqualified partisan quack who has no business working at the world’s most powerful central bank. Her nomination has been condemned by 100’s of economists and Fed alumni, including prominent Republicans and 7 Nobel laureates.” https://t.co/UdhDqk6mMe