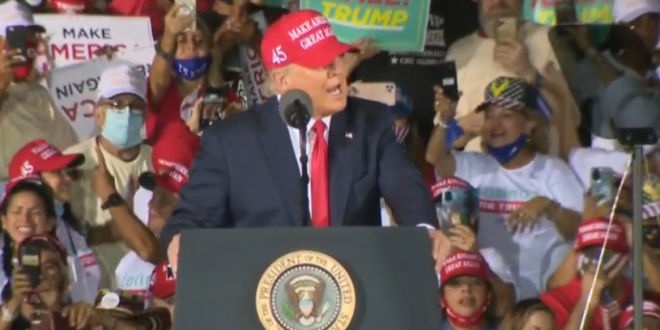 Trump Fantasizes About Physically Assaulting Biden: “You Wouldn’t Even Have To Close The Fist” [VIDEO]

As this dreadful election cycle hurtles toward its sorry climax, we have reached a point that was perhaps always inevitable—the incumbent president threatening to kick his Democratic rival’s ass. At a Sunday night rally in Florida, the recently hospitalized president, who famously believes that doing exercise makes people die young because humans have a finite amount of energy like a battery, daydreamed aloud about how he badly he would beat up fellow septuagenarian Joe Biden if he had the chance.

“Of all the people in the world I could fight that’s probably the one I’d like to most fight. Those legs have gotten very thin” — Trump mocks Biden’s appearance and fantasizes about fighting him pic.twitter.com/3qBjhd7MvK

Trump says he wants to have a physical fight with Biden as ‘those legs have gotten very thin’ https://t.co/D7TfV7cOML