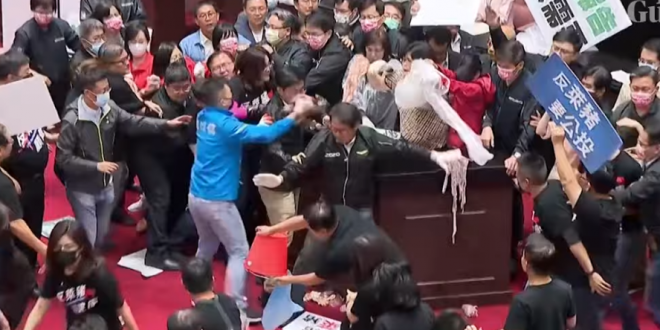 Taiwan’s Reps Brawl With Pig Parts Over US Pork Rule

Taiwan has seen lawmakers throw punches, chairs, eggs and even water balloons during periodic and spectacular bouts of parliamentary violence. But when pigs fly — that’s something unheard of, even by Taiwan’s standards.

Members of the opposition Kuomintang (KMT) on Friday threw pig hearts, intestines, lungs and other innards, leaving the chamber’s crimson carpet streaked with ropy strands of intestine and milky viscera as they protested the ruling party’s decision to allow imports of U.S. pork that contains the additive ractopamine.

More than 100 countries ban meat with the additive, which is used by U.S. pig farmers to promote leanness but frequently poses an obstacle when it comes to exporting abroad.