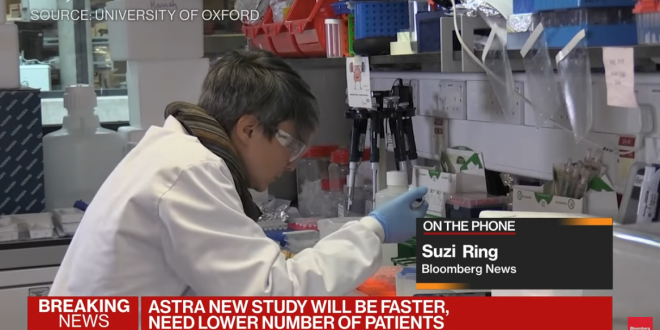 The British government said Friday it has formally asked the country’s medicines regulator to assess whether a coronavirus vaccine developed by AstraZeneca and Oxford University should be authorized for use.

The step comes amid questions about preliminary results from trials of the jab, after the company and the university acknowledged that the most encouraging part of their findings stemmed from a dosing error.

U.K. Health Secretary Matt Hancock said he had asked the Medicines and Healthcare Products Regulatory Agency to determine whether the vaccine “meets rigorous safety standards.” The British government has ordered 100 million doses of the Oxford-AstraZeneca vaccine.

Chief of the White House’s Operation Warp Speed, Moncef Slaoui, and others in the U.S. have expressed concern over the age group tested, saying the 90% efficacy was only shown for the lowest risk group, which numbered 2,741 people below the age of 55.

John LaMattina, a former president of Pfizer Global R&D, said Tuesday it was “hard to believe” that the FDA would issue an EUA for a vaccine whose optimal dose has only been given to 2,300 people.

Pascal Soriot, the CEO of AstraZeneca, confirmed to Bloomberg on Thursday that the British pharmaceutical giant will likely run an additional global trial to evaluate the efficacy of its Covid-19 vaccine.

AstraZeneca said on Monday that study participants in the UK had been given two different courses of the vaccine. The drugmaker, which developed the vaccine with the University of Oxford, did not however, at the time, explain why they used two different dosing regimens or why the size of one group was significantly smaller than the other.

On Tuesday, Mene Pangalos, AstraZeneca’s Executive Vice President who heads up non-oncology research and development, first explained to Reuters that a lab error was the reason why some volunteers had received a smaller dose — the dose that proved to be 90% effective.

“The reason we had the half dose is serendipity,” Pangalos said, adding that researchers had “underpredicted the dose of the vaccine by half.”