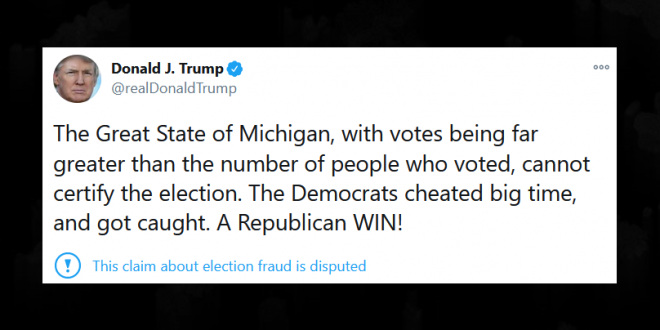 President Donald Trump lost Michigan by 146,000 votes on Nov. 3, but he maintained his false claims Wednesday that he won the battleground state, an attempt to cast doubt on the election’s unofficial results.

Trump’s tweets came a day after the Wayne County Board of Canvassers voted 4-0 to certify the results in the state’s largest county after initially deadlocking 2-2. All 83 counties certified their election results, according to the Board of State Canvassers.

It’s unclear what Trump was specifically referencing. But there is no evidence that there were “far greater” votes than the number of people who voted in Michigan.

The Great State of Michigan, with votes being far greater than the number of people who voted, cannot certify the election. The Democrats cheated big time, and got caught. A Republican WIN!

In Detroit, there are FAR MORE VOTES THAN PEOPLE. Nothing can be done to cure that giant scam. I win Michigan!

Previous CNN Interviews GA Voter That Trump Says Is Dead
Next GOP Rep. Adam Kinzinger: A Lot Of Republicans Are Waiting For Trump To “Come To Terms” With Losing