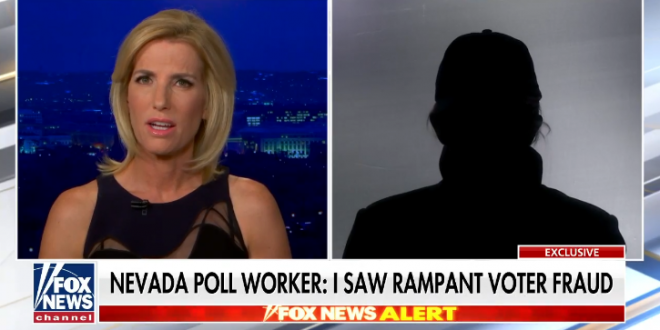 Fox News’ Laura Ingraham interviewed someone claiming to be a “poll worker” in Clark County, Nevada who allegedly witnessed a brazen act of voter fraud during the 2020 Election.

The poll worker spoke to Ingraham on Tuesday night, though the Fox host said her guest would be kept in a silhouette and would have her voice disguised because of “her own safety concerns.”

The guest claimed that she saw a Biden-Harris campaign van parked near her polling location where people were taking papers out of envelopes. “As I walked by I looked and I thought ‘those are ballots.’ It was kind of an odd, like, what are they doing?”

The last clip is hilarious.

This is definitely Trump pic.twitter.com/EuO1CrjK51

I’d really just like to acknowledge the witness’ outfit. Hat, a trench coat with the collar up, hair pulled back. Classic “undercover” outfit. This is pure theatrics. 🕵🏽‍♀️🕵🏽‍♀️🕵🏽‍♀️🕵🏽‍♀️🕵🏽‍♀️ https://t.co/EltgDCYGuB

Obviously the best place to commit voter fraud is standing next to a van marked with your candidate’s logo next to a polling place in front of poll workers. https://t.co/k2YhrfC6z1