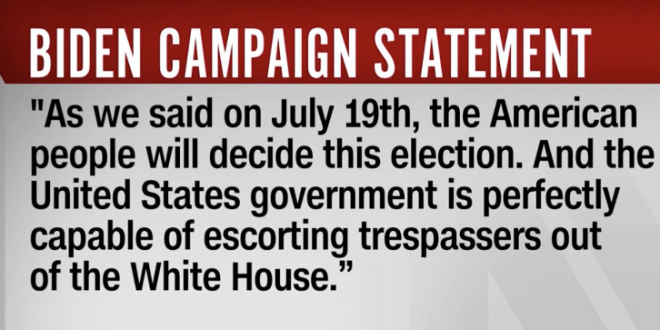 Biden Campaign Goes There On Trump Not Conceding

Democratic presidential nominee Joe Biden’s campaign indicated they’ve been prepared for President Trump not to concede defeat in their race for the White House.

“As we said on July 19, the American people will decide this election. And the United States government is perfectly capable of escorting trespassers out of the White House,” Biden spokesman Andrew Bates told the Washington Examiner.

The Biden campaign released a similar statement on July 19 after Trump declined in a Fox News interview to say whether he would accept the outcome of the election. “I have to see. Look, you — I have to see,” he said. “No, I’m not going to just say yes. I’m not going to say no.”

Biden campaign says government can eject 'trespassers' from White House as Trump declares US election 'not over' https://t.co/9AwJPEFMbP

Previous Christian Activist: Trump’s Losing Is Part Of God’s “4-D Chess Plan To Reveal Dangerous Radicality Of The Left”
Next Trump’s Pastor Prays For God To “Override The Will Of Man” And Have Trump Triumph “By The Blood Of Jesus”