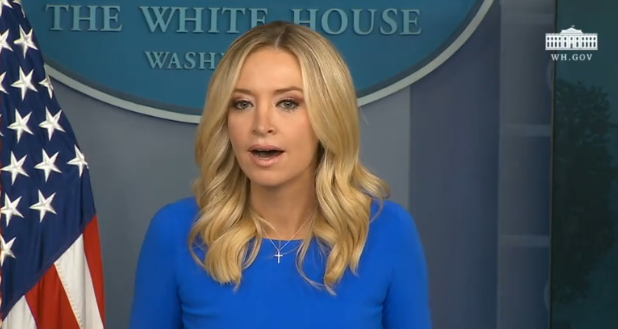 White House press secretary Kayleigh McEnany was quick to join President Trump in claiming victory during his first presidential debate against Democratic presidential nominee Joe Biden, despite his off-the-rails performance that was widely and swiftly panned by the media.

Asked whether Trump believes he won the chaotic debate against Biden during an interview on Fox Business on Wednesday morning, McEnany replied “yes” and that the President was in “very good spirits” as he walked off the stage the night before.

McEnany touted that Trump — who repeatedly cut into Biden’s answers and constantly talked over moderator and Fox News anchor Chris Wallace — “brought the fight that the American people wanted to see” by taking on the role of a reporter.

I won the debate big, based on compilation of polls etc. Thank you!

“She also is a Rhodes scholar,” Trump’s @PressSec says of Amy Coney Barrett, who did not receive a Rhodes Scholarship to study at Oxford, but instead received her BA from Rhodes College in Tennessee.

Kayleigh McEnany, when corrected, says: “Well, that’s what I have written down.” Yet another example of the sloppiness of this White House, re the truth, which has utterly eroded its credibility not just w the media, but w the public. https://t.co/pcwZqJYMM2

Previous Food Banks Balk At Distributing USDA Boxes Because They Must Come With A Letter From Glorious Leader
Next Pelosi Says Trump’s Embrace Of Extremists, Refusal To Commit To Peaceful Transfer, “Keeps Me Up At Night”