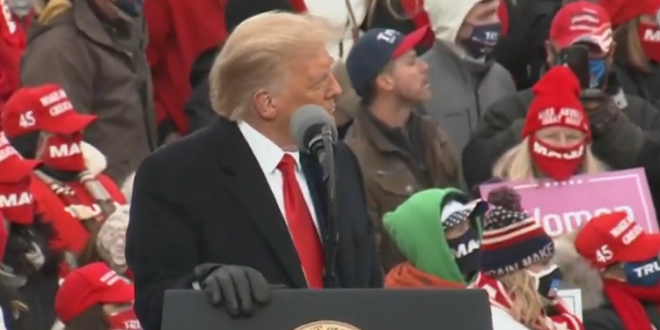 Trump Mocks Ingraham For Wearing Mask At His Rally

President Trump on Friday teased Fox News host Laura Ingraham for wearing a mask at his Michigan campaign rally, chiding her for being “politically correct.”

“I do believe Laura Ingraham is here some place. Where is Laura? Where is she?” Trump said, scanning the crowd for the Fox News host. “I can’t recognize you. Is that a mask?” Trump said, appearing surprised. “No way. Are you wearing a mask? I’ve never seen her in a mask.”

“She’s being very politically correct,” he added. Trump’s outright dismissiveness toward pandemic safety measures comes as the United States sets records for daily coronavirus infections and as Wisconsin, Texas, Utah and others are faced with limited hospital capacity.

They’re eating their own.

Trump not happy Laura Ingraham is wearing a mask and being “Politically Correct”.

Trump says Laura Ingraham is here, then looks over to her and says, “I can’t recognize you. Is that a mask? No way, are you wearing a mask? I’ve never seen her in a mask. Look at you. Laura, she’s being very politically correct. Whoa! Whoa!”