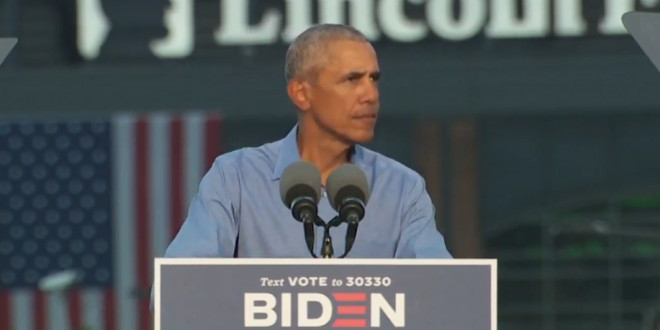 Former President Barack Obama is returning to Philadelphia on Wednesday for his first in-person 2020 campaign event for Joe Biden. It will be held in the afternoon outside Citizens Bank Park in South Philadelphia. The event will be ticketed without public access.

In 2016, the man known as one of the Democratic Party’s strongest orators delivered Hillary Clinton’s closing argument in the same place – at a rally for thousands the night before Election Day on Independence Mall.

Now, with the coronavirus pandemic upending campaigning, Obama will be speaking to a much smaller crowd at a drive-in rally, where supporters will listen to him over the radio inside their cars.

Inside the park, jumbotrons have been strategically set up around the lot so that those sitting in their cars- at the socially distanced event- can hear and see the former POTUS, @BarackObama @6abc pic.twitter.com/359I7rBpsJ

Previous Rudy Giuliani: I Was Only “Tucking In My Shirt”
Next Trump Admin May Label Amnesty International And Other Leading Human Rights Groups As “Anti-Semitic”