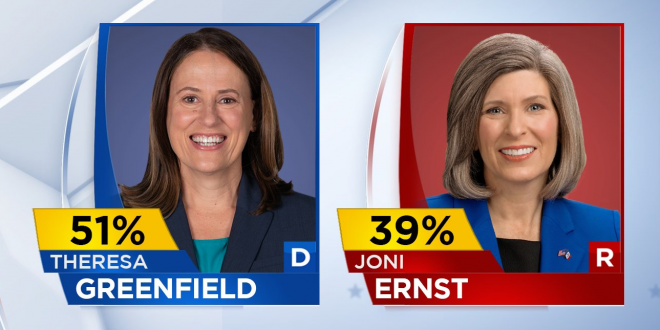 Results from the recently conducted Nexstar Iowa 2020 RABA Research Poll are in, along with results from our two Iowa-based sister stations.

Polling was done shortly after President Donald Trump announced he would fill the empty Supreme Court seat left by the passing of Ruth Bader Ginsburg. Poll takers were asked the question: Would they vote for Republican Joni Ernst or Democrat Theresa Greenfield?

By a margin of 12 points, Iowans are choosing Greenfield. 10 percent of poll participants were undecided or preferred someone else. Among college graduates, Greenfield leads by 11 points.

And this is pre-debate.

Previous Scott Adams: Trump “Screwed Me” With His Proud Boys Debate Answer, “It Was A Layup And He Botched It”
Next Amazon Reveals 20,000 Workers Have Tested COVID+