President Trump’s head popped up during his top-secret intelligence briefing in the Oval Office on Jan. 28 when the discussion turned to the novel coronavirus outbreak in China. “This will be the biggest national security threat you face in your presidency,” national security adviser Robert O’Brien told Trump, according to a new book by Washington Post associate editor Bob Woodward. “This is going to be the roughest thing you face.”

Matthew Pottinger, the deputy national security adviser, agreed. He told the president that after reaching contacts in China, it was evident that the world faced a health emergency on par with the flu pandemic of 1918, which killed an estimated 50 million people worldwide.

Ten days later, Trump called Woodward and revealed that he thought the situation was far more dire than what he had been saying publicly. “You just breathe the air and that’s how it’s passed,” Trump said in a Feb. 7 call. “And so that’s a very tricky one. That’s a very delicate one. It’s also more deadly than even your strenuous flu.” “This is deadly stuff,” the president repeated for emphasis.

The book, using Trump’s own words, depicts a President who has betrayed the public trust and the most fundamental responsibilities of his office. In “Rage,” Trump says the job of a president is “to keep our country safe.”

But in early February, Trump told Woodward he knew how deadly the virus was, and in March, admitted he kept that knowledge hidden from the public.

“I wanted to always play it down,” Trump told Woodward on March 19, even as he had declared a national emergency over the virus days earlier. “I still like playing it down, because I don’t want to create a panic.” 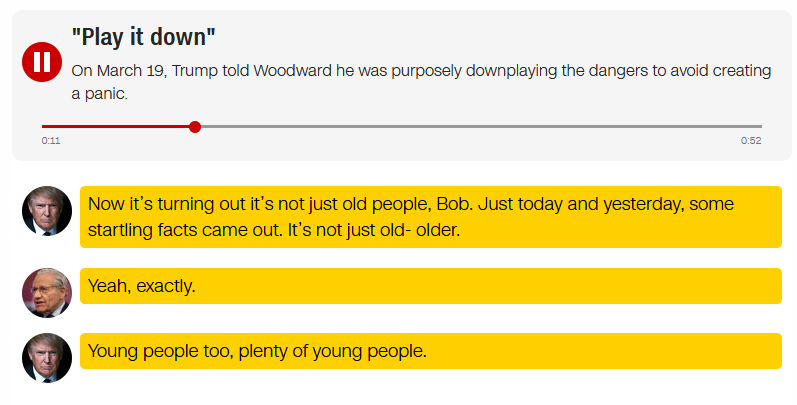 In audio clips from Woodward’s interview, playing on @CNN now, Trump says he thinks China’s Xi has the virus under control and says clearly that the Coronavirus is more deadly than the flu. Trump lied to the public repeatedly after this.

These quotes and audio from the Woodward book are going to be included in 30 second ads by the end of the week. This is damning. Trump knew COVID was going to be bad and he misled the public anyway.

“The interviews were recorded by Woodward with Trump’s permission, and CNN has obtained copies of some of the audio tapes.” https://t.co/cFq8y0Lju1

Trump, on the record, admits to intentionally misleading Americans about a deadly virus. Pretty shocking stuffhttps://t.co/RHvZhiEpaS