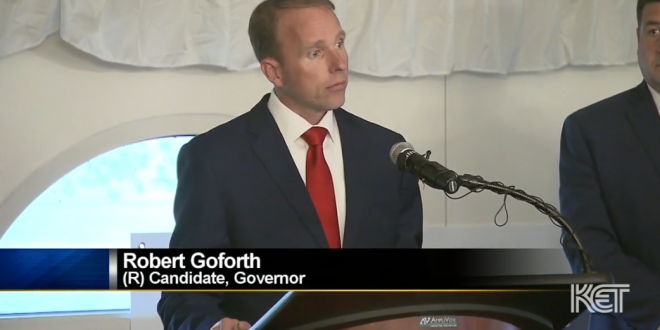 On Friday, a Laurel County grand jury returned an indictment against the 89th District’s State Rep. Robert S. Goforth on strangulation and assault charges stemming from an incident in late April. Goforth of East Bernstadt was indicted on one count of first-degree strangulation and one count of assault in the fourth degree. He was originally charged with the two aforementioned charges and third-degree terroristic threatening.

The female stated she was able to leave the residence after promising Goforth she would unlock her phone — the subject that initiated the altercation, according to the arrest citation. She further stated Goforth grabbed an ethernet cable from a kitchen drawer and while she had her face toward the ground, he began strangling her to the point that she had difficulty breathing and believed she was going to pass out.

As a freshman lawmaker, Goforth voted for a domestic violence bill which would allow strangulation to be prosecuted as a felony. Last year he ran against then-Kentucky Gov. Matt Bevin, taking 39% of the vote in the GOP primary. Bevin was unseated by Democrat Andy Beshear in the general election.

The charges have renewed calls from local Democrats for Goforth, a staunch supporter of President Trump who had previously been accused of sexual assault, to resign from his seat.https://t.co/x0kGHCsxS6

The party of values and morals continues to protect this guy! @KYGOP @GOP

Amid his gubernatorial campaign, a woman accused GOP Rep. Robert Goforth of sexually assaulting her over a decade ago, forcing her to perform oral sex on a business associate. Goforth went on to win 39%.