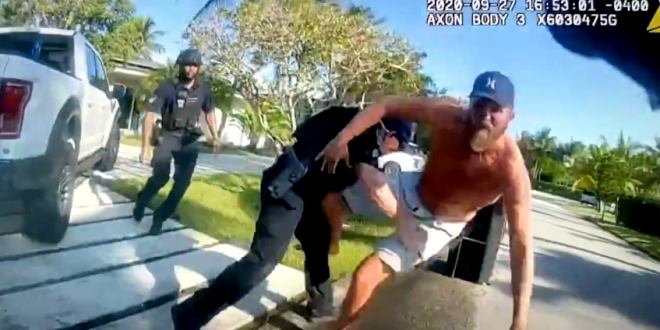 The wife of President Donald Trump’s former campaign chief Brad Parscale feared he was suicidal and said she saw him load a gun before hearing “a loud bang” as she fled, police documents revealed on Monday. Parscale was tackled to the ground by SWAT officers when he didn’t obey commands and was taken into custody under state guidelines allowing for an involuntary mental illness commitment, Fort Lauderdale police reports showed.

Candice Parscale called police on Sunday afternoon, saying she and the prominent GOP political operative had “a verbal altercation” at their home on DeSota Drive in Fort Lauderdale, according to a report prepared by Officer Timothy Skaggs. Skaggs also noted in his report that he saw several bruises on Candice Parscale’s arm. She said she suffered those “a few days ago during a physical altercation with Bradley, which she did not report,” according to Skaggs.

#NEW @NBC6 Ft. Lauderdale Police release body cam video of standoff w/ Ex-Trump campaign manager Brad Parscale. According to police, his wife called for help and had cuts and bruises on her. The clip below shows the moment he was taken into custody. pic.twitter.com/wxuu5jPQOW

Parscale was detained for a psychiatric evaluation after threatening to hurt himself. MORE: https://t.co/wUSrybCCf4 via @NBC6

UPDATE: A much longer clip has been released.