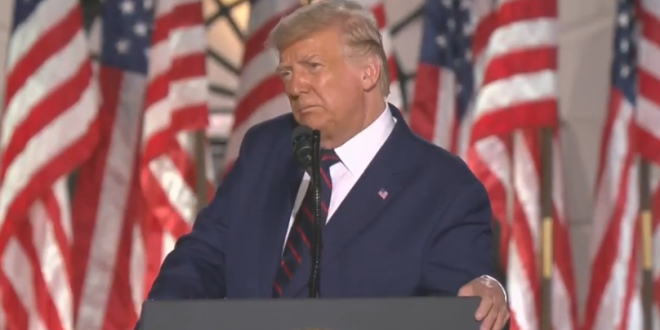 “You may have been a headache,” Bob Hope sang in his signature tune, “but you never were a bore.” Last night, for the first time in memory, Donald Trump was a bore.  It’s not that he had nothing to say. He had everything to say. And he said it. And said it again. And did it in the same tone of voice. Which went like this. And then like that. And then like this again. La. Dee Dah. De Doo.

There was no flow, no argument, no central core. He praised himself and he attacked Joe Biden, just as you’d expect. But he didn’t build a case for himself or a case against Biden — and it’s the construction of such cases that provide the dramatic structure a major speech needs to engage both the head and the heart. For someone who relishes drama, Trump provided none.

It was the typical rambling speech that we’ve come to expect from POTUS where he said a lot of things and not much at all. He covered the usual bases such as the economy and deriding the Democrats but he didn’t have the same pomp and vigour that even his biggest critics would admit that he is very good at.

Most viewers agreed that on Thursday evening, Trump didn’t have that same ludicrous energy that he has displayed in the past and which arguably won him the 2016 election. Even the worryingly big crowd that had assembled in the White House grounds, with no social distancing, seemed almost comatose and weren’t popping for any of Trump’s big lines.

The biggest reaction to Trump’s epic speech was that it was, well, boring, which will undoubtedly hurt the president more than just calling him every name under the sun and criticising his rhetoric.

Mr. Trump began his remarks with an acknowledgment of “the wonderful people who have just come through the wrath of Hurricane Laura,” but notably made no mention of the 180,000 American lives lost to the coronavirus pandemic until much later in his address, when he used a racist term to refer to the virus and called the deaths it had caused “so unnecessary.”

During a speech read from a teleprompter, with little of the free-wheeling, stream of consciousness style typically associated with Mr. Trump’s public remarks, he made little mention of the distress that has swept the country in the wake of the police killings of George Floyd and Breonna Taylor and the more recent shooting of Jacob Blake, focusing instead on what he called the “anarchists, agitators, rioters, looters and flag-burners.”

Just a handful of Trump’s pre-prepared lies included claims that Joe Biden supports abortion “right up to the moment of birth” (he doesn’t), “has promised to abolish the production of American oil” (he hasn’t) and supports defunding the police (also a lie). He claimed Biden, who has long sat near the center of the Democratic Party, “ is a Trojan horse for socialism.”

He said that they “gave everything you can possibly give” to protect nursing homes even though severe PPE shortages caused huge death tolls early on in those centers, He said that the U.S. had developed “a wide array of effective treatments” for COVID, though most treatments’ effectiveness are so far are unproven.

Trump thinks if he’s boring for an hour we’ll forget that everything is a complete fucking mess.

“The fact is, we’re here and they’re not” — Trump rubs our noses in the fact he’s using the White House as a political prop pic.twitter.com/1C4G0TUXFd

Get off our lawn.

Let’s be clear: it is wrong and illegal to use federal property and taxpayer resources for partisan campaigning.

Hell of a thing to watch CNN’s @ddale8 fact-check the cascade of lies from Trump’s speech. pic.twitter.com/aRQuHf0qE5