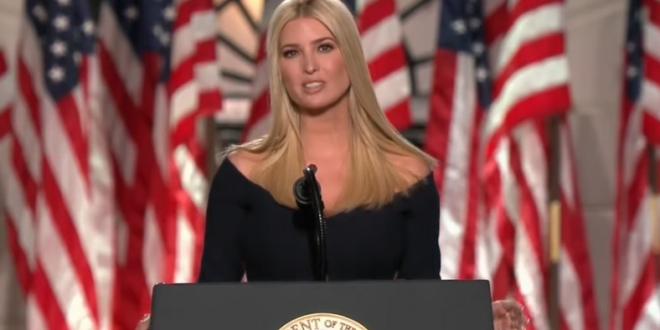 Toward the end of her Thursday night address to the Republican National Convention, Ivanka Trump, the president’s daughter and senior advisor, looked out on the crowd on the White House lawn and took one more swing at the piñata of the week: Joe Biden and the “political elite” who backed him.

“Dad, people attack you for being unconventional, but I love you for being real, and I respect you for being effective,” she said. “Our President refuses to surrender his beliefs to score points with the political elite.”

“To my father, you are the elite.” she continued. “He only cares about scoring points with you.” Considering how many Republican bigwigs, donors, and cabinet officials (but enough about Wilbur Ross!) were in the crowd, sitting uncomfortably close in front of the stage, it might have been the truest thing she said all night.

Ivanka Trump, who has styled herself as a champion for women’s rights inside the White House, said her father has delivered on promises she made on his behalf at the 2016 Republican convention in Cleveland.

“Four years ago in Cleveland, I said that President Trump would deliver for working women,” Ivanka Trump said. “Last year, over 70 percent of all new jobs were secured by women.” But she soon returned to the “Washington outsider” narrative.

“For the first time in a long time, we have a President who has called out Washington’s hypocrisy, and they hate him for it,” she said. “Dad, people attack you for being unconventional, but I love you for being real, and I respect you for being effective.”

A brief moment that happened between Melania Trump and her step-daughter Ivanka Trump while on stage at the 2020 Republican National Convention is going viral. Everyone is pointing out Melania‘s facial expression after Ivanka walked past her on stage at the event on Thursday night (August 27) on the South Lawn at the White House in Washington, D.C. After Ivanka gave her speech and Melania walked on stage with President Trump, she walked past the couple on her way to her seat.

Call it a hunch, but I don’t think Melania likes Ivanka very much. On that, we can agree. #BeBestpic.twitter.com/bqIN6ytR3m

Stephen Colbert on @IvankaTrump bragging at the RNC about her dad combating human trafficking: “And then I watched him tell one of those human traffickers that he wished her well” https://t.co/bzeaYy9b57

I completely agree with Ivanka here. Judge Trump by the results of his 4 years in office. No more words & promises. If you personally are better off & feel our country is moving in a better direction compared to 2016, vote for him again. & if not, vote him out. It’s that simple. https://t.co/GWQ8yhiW3C