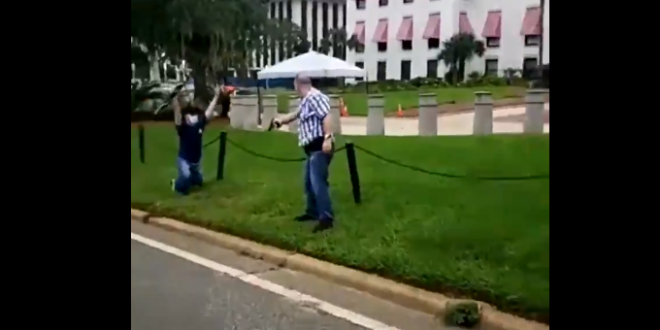 No Charge For FL Man Who Pointed Gun At BLM March

Panic broke out Saturday afternoon at a downtown Tallahassee Black Lives Matter protest after a counter-protester reportedly pulled out a gun. The incident, which started with a fistfight, was caught on video that quickly began to circulate on social media. Witnesses said the incident began as a counter-protester walked up to a crowd of roughly 150 protesters and began arguing with them and taking photos of their license plates.

Video posted online doesn’t clearly show how the fistfight begins, but moments after it does people started yelling. A woman facing the camera screamed “he has a gun” and people scattered. As the camera regained focus, a man can be seen holding a gun and pointing it at a masked protester kneeling on the ground. He turned the gun toward the camera as officers closed in with weapons drawn and directed the man to get on the ground.

Tallahassee police said the man was “lawfully defending himself” with a licensed weapon and declined to press charges. Officials also criticized the protesters for not filing proper paperwork ahead of time.

“Impromptu protests do not allow for adequate TPD support and create potentially dangerous conflicts with vehicles and other individuals,” the police department said in a statement.

“To keep everyone involved safe, local protests must be permitted to allow for proper staffing, notifications and safety measures to be put in place. This helps protect both participants and the community at large.”

Here’s a video of #TrumpViolence in Tallahassee as a psycho enters our protest and hits my GIRLFRIEND – he gets the hands put to him and pulls a gun like he didn’t expect it. Arm yourselves. Tallahassee too strong for that. #BlackLivesMatter pic.twitter.com/D7I6Am8ViT