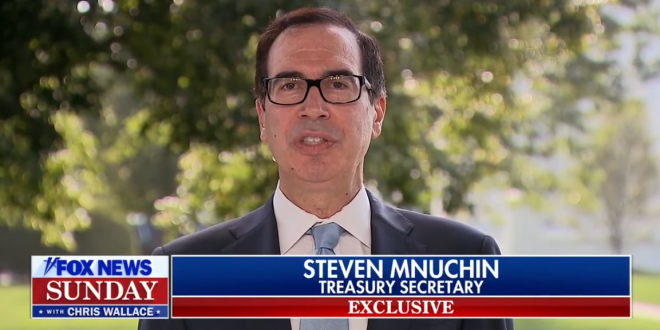 Treasury Secretary Steven Mnuchin on Sunday defended the legality of President Trump’s executive orders to provide financial help during the coronavirus — and said Americans would hold Democrats responsible for delaying the assistance if they challenge the actions in court.

“We’ve cleared with the office of legal counsel all these actions,” Mnuchin said on “Fox News Sunday.”

“If the Democrats want to challenge us in court and hold up unemployment benefits to those hardworking Americans that are out of a job because of COVID, they’re going to have a lot of explaining to do,” he added.

Treasury Secretary Steve Mnuchin suggested on Sunday that Americans will have to pay the government back for any payroll tax reduction unless President Donald Trump is reelected. In an interview on FOX, host Chris Wallace noted that the president’s latest executive action on COVID-19 financial relief is “not a tax cut.”

“Well, the president wanted to do a payroll tax cut,” Mnuchin replied. “We could do the payroll tax deferral. He’s going to go to the American people and tell them that when he’s reelected, he will push through legislation to forgive that so, in essence, it will turn into a payroll tax cut.”

This is actually the biggest news of the day:

President Trump said if he is re-elected, he will look into terminating the payroll tax permanently!