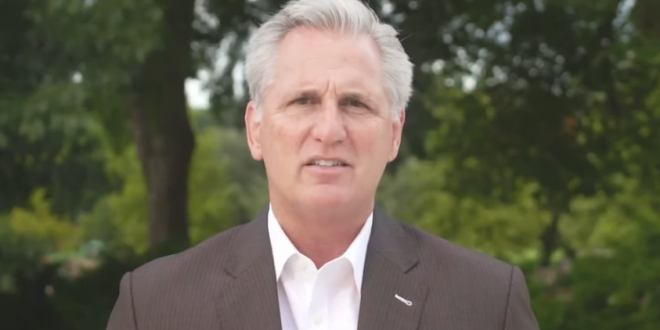 McCarthy At RNC: Trump Is The Savior Of America

House Minority Leader Kevin McCarthy, California’s most powerful Republican, lauded President Trump as a savior for the nation on Thursday, the final night of the GOP’s national convention.

“No one has done more to protect and advance [the United States] than President Trump,” McCarthy said, arguing that Trump created strong trade deals, supported the military and strengthened the border.  “As Republicans, we are proud to stand with him and to work for you. Together we built the greatest economy the world has ever seen — and we will do it again.”

RT to agree ⇨ no one has done more to protect and advance America than President Trump.

Kevin McCarthy keeps saying “we will defeat” COVID-19 because of technology, vaccine blah blah, but couldn’t you JUST TELL PEOPLE TO WEAR THE FUCKING MASK?????

Many are asking who is running against Republican Kevin McCarthy. That’s me. I’m a Democrat, USAF Veteran, systems engineer and a single working mom. And I’m going to defeat him in November. He’s already nervous. Retweet & follow this account so we can keep building our momentum.

As Kevin McCarthy just spoke, a quick vision was shown of Neil Armstrong going to the moon. With Trump in office now Neil couldn’t go to Canada.

Previous Ben Carson At RNC: You’re Wrong To Call Trump Racist
Next Politico: When Becki Falwell Went Down On A Student