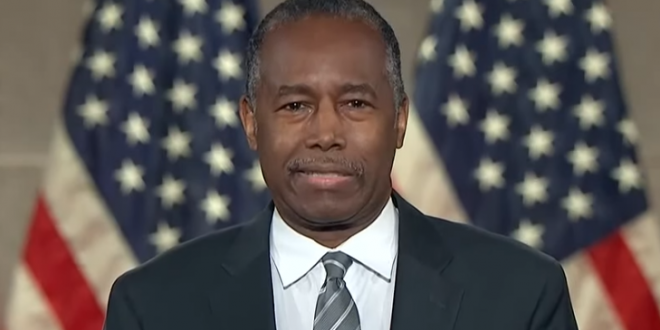 Housing and Urban Development Secretary Ben Carson paused during remarks at the Republican National Convention on Thursday night to express support for the family of Jacob Blake, the Black man shot in the back by police in Kenosha, Wis., on Sunday.

Carson went on to defend Trump’s record on issues important to the Black community, saying Trump — whose recent appeals to suburban voters that he’ll protect them from an invasion of low-income housing have drawn criticism for their racial undertones — does “not dabble in identity politics.”

“Many on the other side love to incite division by claiming that President Trump is a racist,” Carson said. “They could not be more wrong. Years ago, Jesse Jackson gave Donald Trump an award for the economic opportunities he created for Black people.”

A reminder that Ben Carson’s transition from African-American surgeon and icon to right wing political darling began when he attacked the first Black president at the National Prayer Breakfast for providing healthcare to the uninsured via the ACA. #RNCConvention2020

Ben Carson just said “America is great when we behave greatly,” with ZERO self-awareness that the guy he’s promoting behaves worse than a toddler.

Ben Carson is right, Trump doesn’t dabble in identity politics. He dives right in, running an entire campaign with explicit appeals to white nationalists and bigots. Thanks for clearing that up Dr. Carson…#RNCConvention2020

Ben Carson says Trump “is one of us.”

Trump was given a $60 billion “loan” from his father that he never repaid, went on to bankrupt more than a dozen businesses, bragged about being a sexual predator, and suggested we use “heat rays” to deter immigrants from coming to the US.

Previous Franklin Graham Thanks God For Trump In RNC Prayer
Next McCarthy At RNC: Trump Is The Savior Of America