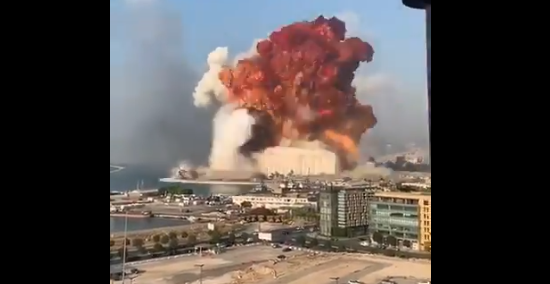 A massive explosion has rocked central Beirut that shattered windows, knocked down doors and shook buildings several hundred feet away. The source of the blast, which appeared to occur around the Lebanese capital’s port, is unclear.

An enormous cloud of smoke could be seen from across the city and witnesses said there were reports of a fire and several smaller explosions at the port that preceded the large blast after 6pm on Tuesday.

The office of the Daily Star newspaper about 400 metres from the port was among the buildings to sustain damage from the explosion.

A video I received on WhatsApp of the scalr of explosion in #Beirut, confirming it was at the port. pic.twitter.com/bIkcyfsi0o

A view of the explosion from the coast in Beirut. That’s massive. pic.twitter.com/qmnNEC5jPI

Previous Trump Twice Pronounces National Park As “Yo-Semites”
Next Daily Wire: Only Taxpayers Should Be Allowed To Vote