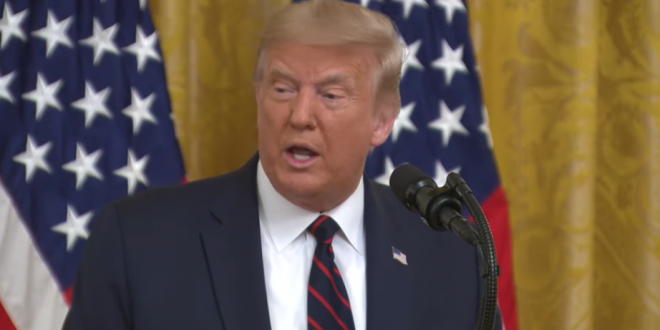 President Donald Trump is expected to sign a bipartisan bill Tuesday that would spend nearly $3 billion on conservation projects, outdoor recreation and maintenance of national parks and other public lands.

Supporters say the measure, known as the Great American Outdoors Act, would be the most significant conservation legislation enacted in nearly half a century.

The bill would spend about $900 million a year — double current spending — on the popular Land and Water Conservation Fund, and another $1.9 billion per year on improvements at national parks, forests, wildlife refuges and rangelands.

tfw you’re the president and don’t know how to pronounce “Yosemite” pic.twitter.com/r1oyzrXb6D

Best part of pronouncing Yosemite as “Yo-Semites” is pausing, thinking it over, and doing it again.

Trump struggles to pronounce “Yosemite” in prepared comments. I knew how to say it growing up in Australia thanks to Yosemite Sam and Looney Toons. pic.twitter.com/cv5hSMDCFn

I bet Joe Biden knows how to pronounce Yosemite.

I look forward to the White House briefing where linguistic experts are rolled out to explain how, for generations, we’ve all been pronouncing “Yosemite” wrong.

The worst part of this is not that our president doesn’t recognize or know how to pronounce Yosemite.

It’s that he pronounced it “yo-semites” realized that’s wasn’t right and tried “yo-seminites” instead, before moving on.

Is he even an American?pic.twitter.com/reMbjyj4BC

We all laugh, but just remember: if Biden had said this, the Trump campaign would have already cut attack ads on it and Fox News would have devoted a day’s coverage to Biden’s gaffe/dementia etc on Yosemite. The Dems could do far more to weaponize Trump’s sheer ignorance tbh. https://t.co/z9a4bPUPSy