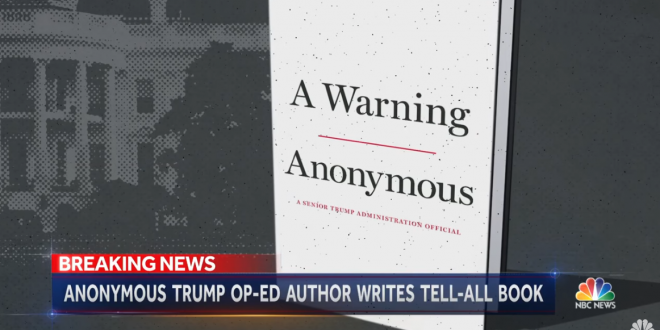 “Anonymous” is trolling President Donald Trump one more time. The self-described “senior Trump administration official,” who anonymously trashed the president’s leadership in a 2018 op-ed and a 2019 best-selling book, is calling for voters to throw the president out of office this November in a new preface for the paperback “2020 election edition” of the book, “A Warning.”

Since their New York Times op-ed went viral in September 2018 and their book hit the top of the paper’s best-seller list in 2019 — replacing Donald Trump Jr.’s book — the person’s identity has been the subject of tremendous intrigue in the White House. Trump called the original op-ed an act of treason and asked for the Justice Department to investigate. In 2019, the DOJ asked the book’s publisher and the author’s agents for identifying details.

Scooplet: ‘Anonymous’ is back and says oust Trump in Nov.
In a first look at the new preface for the “2020 election edition” paperback, he/she says “Trump unbound will mean a nation undone.” Doesn’t explicitly say vote Joe but takeaway is unmistakable.https://t.co/h5vt4pt2yX