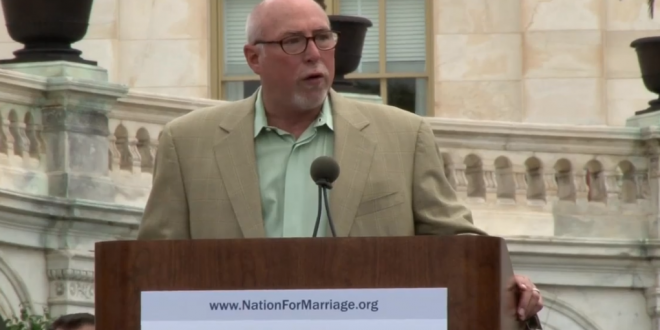 NOM Is Still Butthurt Over Prop 8 And Kamala Harris

Via email from NOM’s Frank Schubert:

As Attorney General, Kamala Harris ignored her oath of office and refused to defend Proposition 8 in court – a legally binding, validly enacted constitutional provision approved by millions of Californians – and also refused to appeal the federal court decision invalidating it.

This resulted in an extraordinary legal situation, unprecedented in the history of California, where the proponents of the measure had to step in to defend it because the person whose job it is refused to do so.

The California Supreme Court ruled overwhelmingly that the sponsors of the measure were entitled to defend it in federal court, just as they had done in state court.

The Ninth Circuit Court of Appeals agreed, and then proceeded to rule against us, upholding the trial judge’s ruling invalidating the measure. So, the constitutionality of Proposition 8 was appealed to the US Supreme Court.

Once again, Harris refused to do her job and defend Prop. 8. The Proposition 8 case was among the most high-profile cases in the nation when it was argued before the Supreme Court in the spring of 2013.

On June 26th of that year the US Supreme Court issued a devastating ruling stating that the proponents of Proposition 8 did not have standing in federal court and directed the Ninth Circuit to lift the stay against the trial judge’s ruling invalidating the initiative. It died for lack of a defense.

Two days later, Kamala Harris – who helped orchestrate the overturning of Prop. 8 – officiated the “wedding” of the two male plaintiffs who brought the case challenging the constitutionality of Proposition 8.

I could go on and on about Kamala Harris’ despicable record. In her, the left not only has someone who agrees wholeheartedly with every aspect of their agenda, but someone willing to cheat and scheme to achieve it. Under Kamala Harris the “rule of law” means “the laws I support will rule.”

NOM has a big job ahead to educate the American people about the disaster that would come from allowing an unconscionable schemer like Kamala Harris to be a heartbeat away from the presidency. Let’s get to work.