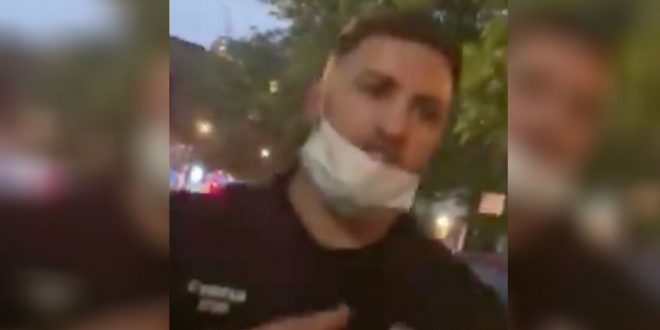 A New York City police officer surrendered to face criminal charges on Tuesday, over a week after he was recorded on video shoving a woman to the ground and cursing at her during a protest against police brutality, the police commissioner and law enforcement officials said.

The Brooklyn district attorney’s office plans to charge the officer, Vincent D’Andraia, with misdemeanor assault, harassment and menacing over the May 29 incident, one law enforcement official said, speaking on the condition of anonymity to discuss an open investigation.

Cellphone video showed him knocking the victim, Dounya Zayer, 20, to the ground and calling her a “bitch” after she asked him why he told her to get out of the street.

The cop was caught on video violently pushing Dounya Zayer to the ground during a nighttime march against police brutality on May 29, following the death of George Floyd earlier that week.

Zayer and bystanders were using cellphone cameras during the demonstration and caught the incident on video. She was hospitalized for a head injury she suffered when she hit the ground.

The officer was suspended from the department without pay on Friday following an Internal Affairs Bureau investigation into the incident, NYPD Commissioner Dermot Shea had said.

New York Police Officer Vincent D’Andraia will be charged with misdemeanor assault, harassment and menacing for shoving 20-year-old Dounya Zayer to the ground and calling her a “bitch.”

But I’m sure Trump thinks she staged her fall too. https://t.co/rcMbIeI924

An NYPD cop caught on a viral video shoving a George Floyd protester in Brooklyn surrendered to authorities to face charges.

Officer Vincent D’Andraia is expected to be charged with official misconduct and third-degree assault.https://t.co/bEmY6svoH9