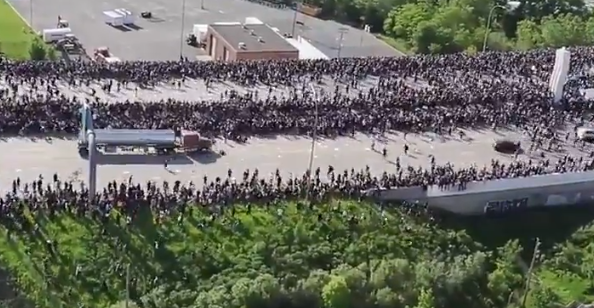 No Charges For Trucker Who Barreled At Protesters

A 35-year-old truck driver accused of driving aggressively past peaceful protesters on Sunday in Minneapolis was released from jail on Tuesday. The truck driver, Bogdan Vechirko, was not charged with a crime.

A statement by Hennepin County Attorney Mike Freeman said investigators were still “gathering additional information and answers to aid in the charging decision.”

His arrest came after a video showed an 18-wheeler speeding past a large group of peaceful protesters on I-35 in Minneapolis. The highway was shut down and was filled with people demonstrating against the police killing of the Minneapolis resident George Floyd.

Several protesters on the bridge, including Drew Valle, said the truck’s driver “wasn’t stopping. He was beeping loudly and driving into a crowd of people.” Minneapolis schoolteacher Doug Butler said that while “we perhaps cannot know his motives … he sped [and] hurtled into protesters.”

Loghinov and others in the family commissioned a brief video that features Vechirko’s wife appealing for financial help on behalf of the couple.

Liudmila Vechirko, who is eight months pregnant, says in Russian with subtitles, “Due to multiple requests, I am recording this video for those who care and want to help our family.” She then holds up a piece of paper with an address for a PayPal fundraising account.

A truck driver who drove his 18-wheeler into a massive crowd of protesters in Minneapolis over the weekend has been released from jail without charges https://t.co/qQTrT9gUKj