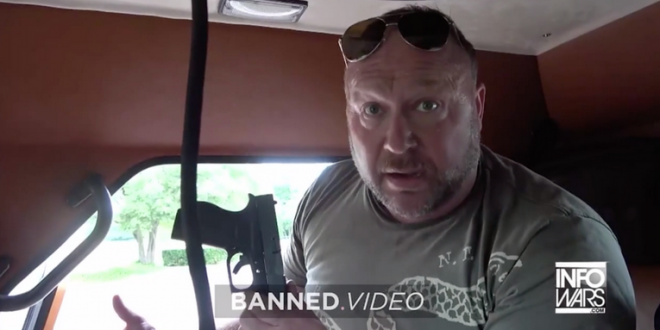 As police forces around the country carry out indiscriminate violence against protesters, bystanders, and press — and the president tear-gasses peaceful protests and incites mayhem for a photo-op — far-right conspiracy theorist Alex Jones is recklessly telling his followers to carry guns to counter protesters. Jones played a clip of an armored vehicle that Infowars takes to events and which appeared to be slightly damaged at a recent protest.

Holding a pistol and calling himself “a big gun enthusiast,” Jones said that he normally doesn’t carry firearms, “but now I’m actually carrying a 9 mm because these people will probably try to molotov cocktail us or attack us, they’ll try to kill us if they were able get in” the vehicle. He added, “So that’s what we have to do in America is now arm ourselves to go on the streets of America because you can’t count on the police because they’re surrounded and outgunned.”

Previous Nadler Moves To Punish Barr With $50M Budget Cut
Next Dennis Prager: If The Left Really Cared About Blacks They Would Tell Them To Elevate Their Moral Standards