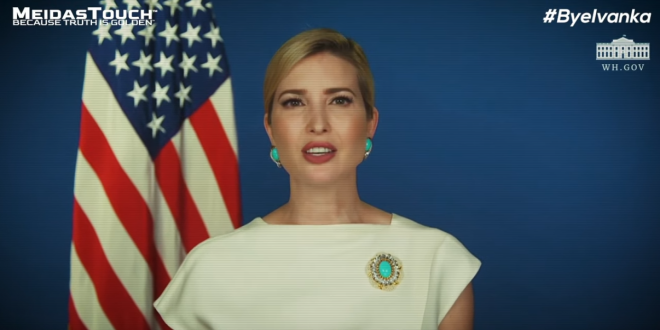 From the three brothers known as MeidasTouch:

MeidasTouch’s new video ‘Bye Ivanka’ has been launched with the hashtag #ByeIvanka. The video takes the commencement address given by Ivanka Trump today that no one asked her or invited her to give (which she gave in front of an empty room using White House resources after Wichita State canceled her speech because her and her family are hate-mongers) and places her scripted, sterile, and disingenuous words against the backdrop of what is actually going on in the country. The tears described in Ivanka’s speech are not the tears of happiness from graduating as she would have us think, but tears from the tear gas blasted in the faces of peaceful freedom fighters in the streets of DC and across the country at the command of her father.