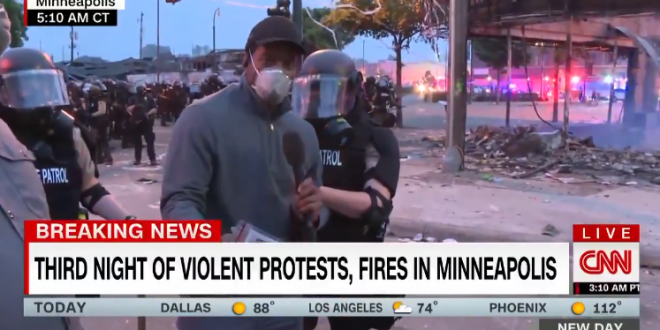 CNN journalist Omar Jimenez has been taken into police custody during a live broadcast at the site of the protests in Minneapolis, after clearly identifying himself to officers. Jimenez’s crew, including a producer and a camera operator, were also placed in handcuffs.

The CNN camera was also taken into custody and continued to record as the crew was handcuffed, with police seemingly unaware that the camera was still on.

CNN anchors said Jimenez and his crew were arrested for not moving after being told to by police, though the live footage prior to their arrests clearly shows Jimenez talking calmly with police and offering to move wherever necessary.

CNN president Jeff Zucker spoke with the governor of Minnesota, Tim Walz on Friday morning, following the arrest of CNN’s team in Minneapolis,

Walz said he “deeply apologizes” for what happened and is working to have the CNN team released immediately.

Walz described the arrests as “unacceptable,” said CNN’s team clearly has the right to be there, and said he wants the media to be in Minnesota to cover the protests.

Police clearly saw that @OmarJimenez and his team were broadcasting live, reporting on the protests. During the arrest Omar kept asking them where they wanted him to be. They arrested him anyway. I just cannot believe this.

A CNN reporter & his production team were arrested this morning in Minneapolis for doing their jobs, despite identifying themselves – a clear violation of their First Amendment rights. The authorities in Minnesota, incl. the Governor, must release the 3 CNN employees immediately.

Quite chilling to see a co-operative CNN journalist get arrested live on TV pic.twitter.com/HHTpymllC4

Here’s the full video of @CNN‘s crew being detained and arrested by the Minnesota State Patrol, live on @NewDay.pic.twitter.com/rmq1nutOiR

I stand with @OmarJimenez, the @cnn reporter arrested by Minnesota State Police on live television. My heart just hurts.

BREAKING: One officer informed Jimenez that he was under arrest without explaining the reason why. Police did not interfere with a white CNN correspondent and his crew at the scene https://t.co/WZwcec435Z

there are two cnn reporters in minneapolis. see if you can guess which one just got arrested. pic.twitter.com/JAsmNT1GDx

Having arrested @CNN reporter on the air, cops are now carrying around camera without knowing it’s still on, live.