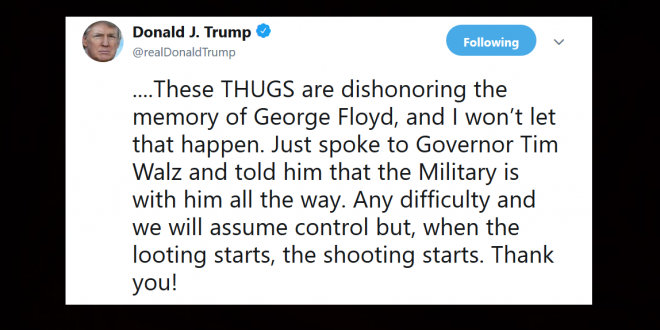 Twitter said early Friday that a tweet from President Trump implying that protesters in Minneapolis could be shot violated the company’s rules against glorifying violence, in a move that threatens to escalate tensions between Mr. Trump and his favorite social media megaphone over its content policies.

The company prevented users from viewing Mr. Trump’s message without first reading a brief notice describing the rule violation. Twitter also blocked users from liking or replying to Mr. Trump’s post. But Twitter did not take the tweet down, saying it was in the public’s interest that the message remain accessible.

Twitter said that it had made its decision “based on the historical context of the last line, its connection to violence, and the risk it could inspire similar actions today.”

His phrase “when the looting starts, the shooting starts,” mirrors language used by a Miami police chief in the late 1960s in the wake of riots. Its use was immediately condemned by a wide array of individuals, from historians to members of rival political campaigns. Some users reported the tweet to Twitter as a rule violation.

Twitter has said in the past that it makes exceptions to its rules when heads of state are involved, due to the inherently newsworthy nature of their posts. The company’s flagging of Trump’s post comes during a week of intense vitriol directed at Twitter by the tweeter-in-chief.

I can’t stand back & watch this happen to a great American City, Minneapolis. A total lack of leadership. Either the very weak Radical Left Mayor, Jacob Frey, get his act together and bring the City under control, or I will send in the National Guard & get the job done right…..

….These THUGS are dishonoring the memory of George Floyd, and I won’t let that happen. Just spoke to Governor Tim Walz and told him that the Military is with him all the way. Any difficulty and we will assume control but, when the looting starts, the shooting starts. Thank you!

We have placed a public interest notice on this Tweet from @realdonaldtrump. https://t.co/6RHX56G2zt

This Tweet violates our policies regarding the glorification of violence based on the historical context of the last line, its connection to violence, and the risk it could inspire similar actions today. https://t.co/sl4wupRfNH

We’ve taken action in the interest of preventing others from being inspired to commit violent acts, but have kept the Tweet on Twitter because it is important that the public still be able to see the Tweet given its relevance to ongoing matters of public importance.

US President Donald Trump’s tweet on the protests in Minnesota, which he posted as protesters set fires in St. Paul and Minneapolis, has been flagged by Twitter as violating the platform’s rules. https://t.co/WRetSthgdA

I don’t recall you using the word Thugs in describing these people. Just know when the Trump says Thugs, he means black people and is advocating assassinations. pic.twitter.com/yb0WpRdw9L