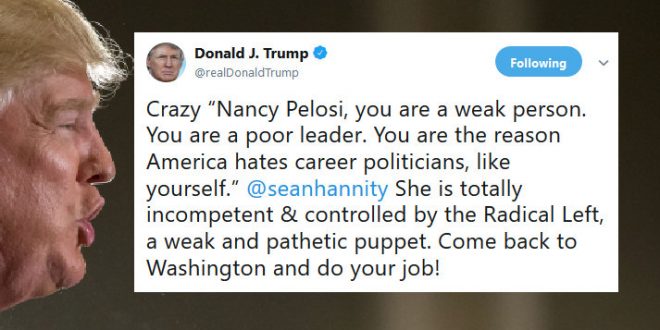 Trump mocked Nancy Pelosi as a “weak and pathetic puppet” after the House speaker criticized the president’s handling of the coronavirus pandemic. “Come back to Washington and do your job!” Trump wrote in a tweet directed at Pelosi, even though the DC area is currently seeing a surge in coronavirus cases and officials are warning against discretionary travel.

On Tuesday night, Pelosi released a “Dear Colleague” letter arguing Trump’s mishandling of the current crisis had cost some Americans their lives. “The truth is that Donald Trump dismantled the infrastructure handed to him which was meant to plan for and overcome a pandemic, resulting in unnecessary deaths and economic disaster,” Pelosi wrote.

Crazy “Nancy Pelosi, you are a weak person. You are a poor leader. You are the reason America hates career politicians, like yourself.” @seanhannity She is totally incompetent & controlled by the Radical Left, a weak and pathetic puppet. Come back to Washington and do your job!

Keep in mind that Trump’s comments about “adjourning” Congress and GOP elected officials push to sacrifice lives to open economy are all by design to Distract from discussions about the real reason 30,000 Americans are dead and the economy collapsed. That reason is DONALD TRUMP!

loving this message of bipartisanship and unity in a time of national crisis, President Festering Bedbug sir, and in no way does this make you sound like a petty full-diaper lunatic

Response from Pelosi spox Hammill: “Every knock from him is a boost. It’s difficult to imagine more projection in one tweet.” https://t.co/vPW5pzTBgC