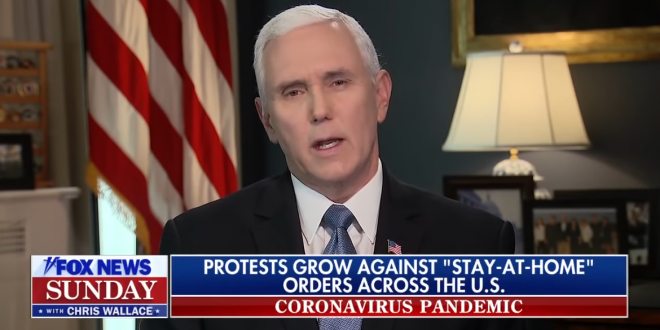 Vice President Mike Pence on Sunday defended President Donald Trump for inciting protests in the middle of a pandemic. During an interview on Fox New Sunday, host Chris Wallace noted that demonstrators calling for the economy to reopen were seen violating social distancing guidelines.

“But Mr. Vice President,” Wallace said. “In a number of these cases, these protesters — who are not social distancing — are saying they don’t want to wait. In many cases, they’re protesting your own guidelines to stop the spread.”

“The American people know that no one in this country wants to reopen this country more than President Donald Trump,” Pence insisted. “And on Thursday that president asked us to lay out guidelines for how the states can responsibly do that.”

Pence is so blinded by ambition he can’t even answer a simple question about why Trump is inciting white people to protest. https://t.co/C2Syh6KpUa

And the Yes Master Igor award goes to … pic.twitter.com/hxecWnCjHr