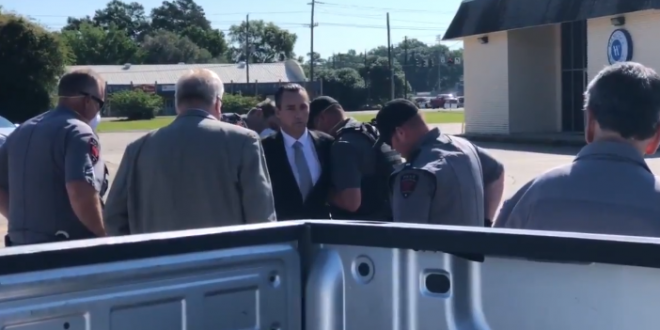 A Louisiana pastor who has defied state orders against large gatherings was arrested on Tuesday for allegedly backing his church bus dangerously close to a protester.

Tony Spell of Life Tabernacle Church in the city of Central, near Baton Rouge, was charged with aggravated assault in connection to the incident that was caught on tape, police said. Spell, wearing a suit and tie, was handcuffed as he turned himself in Tuesday morning.

Central police chief Roger Corcoran said local authorities are trying to enforce the law and insisted that Spell isn’t being denied his freedom to practice religion.

Earlier today Spell told the Washington Post that the police would have to come drag him out of his church. Looks like he thought better of that tactic.

Central chief Roger Corcoran said Spell initially requested for officers to meet him at his church, but Corcoran declined, saying he wanted to avoid media showboating. Told Spell he’d have to come to the department. Building is closed, so officers met him in the parking lot.