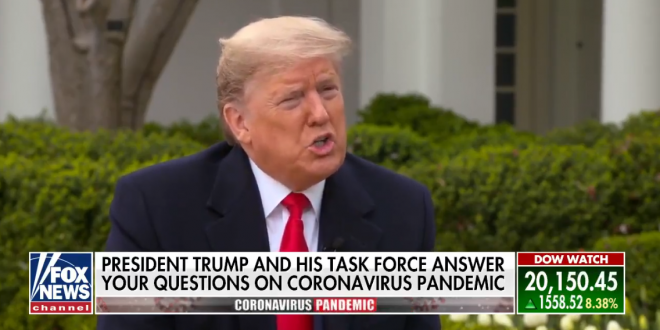 “It says ‘New York Governor Cuomo rejected buying recommended $16,000 ventilators in 2015 for the pandemic,’ for a pandemic, established death panels, and lotteries instead,” Trump said. “So he had a chance to buy, in 2015, 16,000 ventilators at a very low price and he turned it down, I’m not blaming him or anything else but he shouldn’t be talking about us. He’s supposed to be buying his own ventilators.”

Trump was quoting a Gateway Pundit blog post that falsely accuses Cuomo of turning down the purchase of ventilators in 2016, and which is based on an opinion column penned by the co-inventor of the original “death panel” lie, Betsy McCaughey.

It should be noted that the Gateway Pundit has an incredibly low credibility rating from fact checkers. According to the media watchdog group NewsGuard, the Gateway Pundit “regularly publishes hoaxes and widely shared conspiracy theories.”https://t.co/exmepAYasu

Pretty sure Trump just used Gateway Pundit as a source for his oppo hit on Gov. Cuomo during his Fox News coronavirus townhall.

And my god this whole thing is wildly irresponsible. pic.twitter.com/9k69foHPk4

Trump rebutted Cuomo’s pleas for ventilators by reading the headline of this Gateway Pundit article https://t.co/05sgw9wb9C which injected “death panels” into an original article by Fox News Contributor
Betsy McCaughey. Trump’s claim was not questioned by Fox News.

Today Trump smeared Gov Cuomo with a LIE from a conspiracy blog-this will now become seen as “fact” in Trump world – Trump is a threat to this nation in every way. Trump Cites Conspiracy Blogger Gateway Pundit to Attack Andrew Cuomo Over Coronavirus https://t.co/zdCAnX8OXt