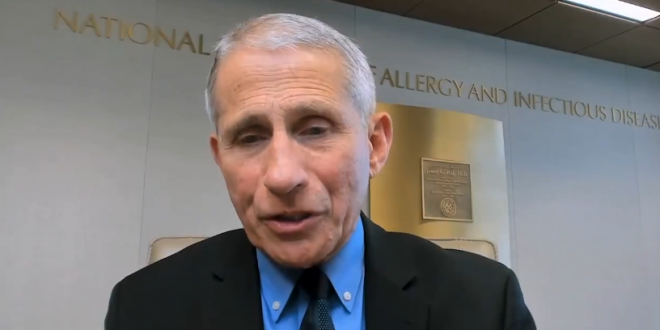 The U.S. government’s foremost infection disease expert says the United States could experience more than 100,000 deaths and millions of infections from the coronavirus pandemic.

Dr. Anthony Fauci, speaking on CNN’s “State of the Union” on Sunday, offered his prognosis as the federal government weighs rolling back guidelines on social distancing in areas that have not been as hard-hit by the outbreak at the conclusion of the nationwide 15-day effort to slow the spread of the virus.

Dr. Anthony Fauci says there could potentially be between 100,000 to 200,000 deaths related to the coronavirus and millions of cases. “I just don’t think that we really need to make a projection when it’s such a moving target, that you could so easily be wrong,” he adds. #CNNSOTU pic.twitter.com/F2MOHY3xl4

Previous Mnuchin: Reopening The US Will Be A Health Decision
Next POLL: Majority Don’t Believe Trump’s Lies About Virus