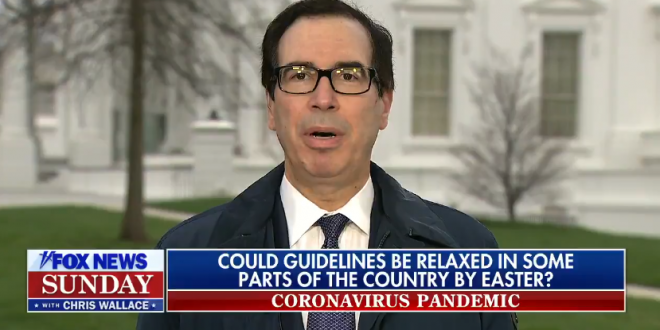 Mnuchin: Reopening The US Will Be A Health Decision

Treasury Secretary Steven Mnuchin says a decision whether to reopen the nation back for business as early as Easter will be a health decision not an economic one.

Mnunchin acknowledges surging unemployment numbers and declining GDP as 1 in 3 Americans remain under government orders to stay at home to slow the coronavirus that has killed over 2,000 Americans. But he says President Donald Trump’s top objective is the health of the American public.

Mnuchin tells “Fox News Sunday” and CBS’ “Face the Nation” that his own top focus is getting stimulus money from the just-passed $2.2 trillion aid package from Congress immediately into the hands of workers and businesses.

Treasury Secretary Steven Mnuchin joined FOX News Sunday to discuss actions the Trump administration are taking to contain the virus. Mr. Trump has an aggressive timeline to open parts of the economy by Easter. Is that realistic? Steven Mnuchin responds. #FNS #FoxNews pic.twitter.com/KwVBf52kZ2

Why does Steven Mnuchin looks like someone auditioning to be in Kraftwerk? pic.twitter.com/uWhqlpbW1Q