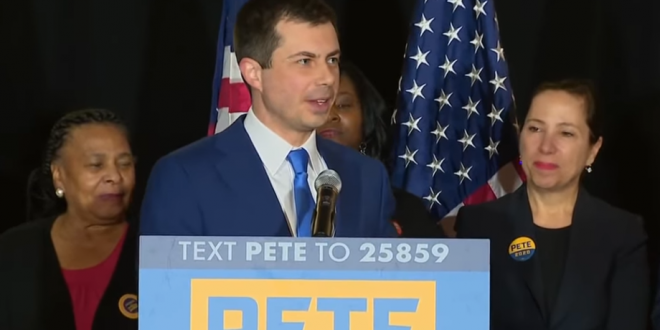 Pete Buttiegieg Unloads On Sanders: He Doesn’t “Give A Damn” About His Effect On Downticket Democrats

“I congratulate my competitors on a vigorous campaign here in Nevada, and I congratulate Senator Sanders on a strong showing today, knowing that we celebrate many of the same ideals. But before we rush to nominate Senator Sanders in our one shot to take on this president, let us take a sober look at what is at stake for our party, for our values, and for those with the most to lose. There is so much on the line and one thing we know for sure is that we absolutely must defeat Donald Trump and everything that he represents in America.

“But that is different from Senator Sanders’ vision of capitalism as the root of all evil, that would go beyond reform and reorder the economy in ways that most Democrats, not to mention most Americans, don’t support. I believe we need to defeat Donald Trump and turn the page on this era in our politics by establishing a tone of belonging, bringing an end to the viciousness and the bullying that is tearing apart our country. We must change what it feels like to live in the United States of America.

“That is a real difference from Senator Sanders revolution with the tenor of combat and division and polarization leading to a future where whoever wins the day, nothing changes the toxic tone of our politics. I believe the only way to truly deliver any of the progressive changes that we care about is to be a nominee who actually gives a damn about the effect you are having from the top of the ticket on those critical frontline House and Senate democrats that we need to win.” – Pete Buttigieg, in last night’s concession speech.

Read the speeches from all candidates here.