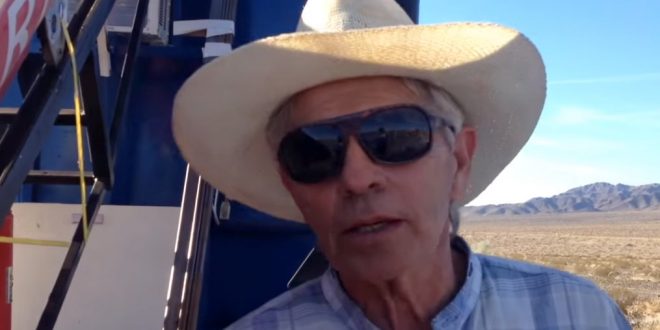 A US daredevil pilot has been killed during an attempted launch of a homemade rocket in the Californian desert. “Mad” Mike Hughes, 64, crash-landed his steam-powered rocket shortly after take-off near Barstow on Saturday.

A video on social media shows a rocket being fired into the sky before plummeting to the ground nearby. Hughes was well-known for his belief that the Earth was flat. He hoped to prove his theory by going to space.

Saturday’s launch was reportedly filmed as part of Homemade Astronauts, a new TV series about amateur rocket makers to be aired on the US Science Channel. The project had to be carried out on a tight budget.

Michael ‘Mad Mike’ Hughes tragically passed away today during an attempt to launch his homemade rocket. Our thoughts & prayers go out to his family & friends during this difficult time. It was always his dream to do this launch & Science Channel was there to chronicle his journey pic.twitter.com/GxwjpVf2md

Why is the science channel providing thoughts and prayers?
That would be like the medical channel sacrificing a goat to cure tinnitus

A self-styled daredevil died Saturday after a rocket in which he launched himself crashed into the ground, a colleague and a witness say. “Mad” Mike Hughes died after the homemade rocket crashed on private property near Barstow, California. https://t.co/koAzF44QZX

So the dream to prove the earth is flat has ended for Mad Mike. He built a rocket to try and prove his theory. It didn’t end well#MadMike #flatearth pic.twitter.com/0UVdz6DHUh

Previous Pete Buttiegieg Unloads On Sanders: He Doesn’t “Give A Damn” About His Effect On Downticket Democrats
Next Trump Congratulates “Crazy Bernie” On Nevada Win