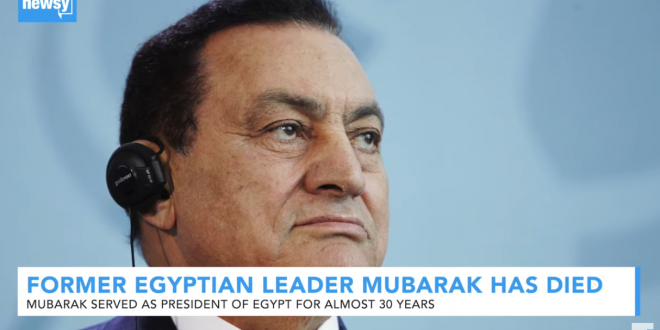 Hosni Mubarak, the Egyptian leader who for nearly 30 years was the resolute face of stability in the Mideast before being forced by the military to resign after 18-day nationwide protests that were part of the Arab world’s 2011 pro-democracy upheaval, died on Tuesday. He was 91.

Throughout his rule, he was a stalwart U.S. ally, a bulwark against Islamic militancy and guardian of Egypt’s peace with Israel. But to the tens of thousands of young Egyptians who rallied for 18 days of unprecedented street protests in Cairo’s central Tahrir Square and elsewhere in 2011, Mubarak was a relic, a latter-day pharaoh.

They were inspired by the Tunisian revolt, and harnessed the power of social media to muster tumultuous throngs, unleashing popular anger over the graft and brutality that shadowed his rule. In the end, with millions massed in Tahrir Square and other city centers around the country, and even marching to the doorstep of Mubarak’s palace, the military that long nurtured him pushed him aside on Feb. 11, 2011.

Mr. Mubarak lived to see the demise of the revolution that overthrew him. It was at best grim satisfaction for a president who rose to power in 1981 after the assassination of President Anwar Sadat and had kept a tight grip on his country through decades of repression, corruption and cronyism, only to be deposed by the military after massive street protests during the Arab Spring uprising.

A war hero who styled himself as a bulwark against Islamist extremism, Mr. Mubarak portrayed his regime as indispensable to the West — and to the United States in particular. He wooed American presidents, drawing encomiums from Ronald Reagan and Bill Clinton as an indispensable partner in keeping the peace in a region where that was a rare commodity.

Former Egyptian dictator Hosni Mubarak has died in Cairo at the age of 91. Mubarak spent 30 years in office before a popular uprising swept Egypt in 2011, and he was driven out of power. Was detained and tried on charges of murdering protestors, and acquitted in in 2017. pic.twitter.com/30wUTiB1Kx