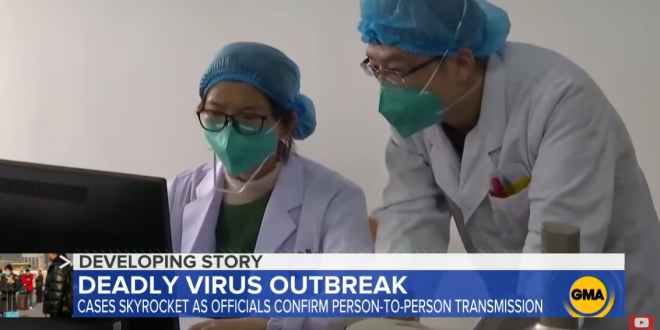 A person in Washington State is infected with the Wuhan coronavirus, the first confirmed case in the United States of a mysterious respiratory infection that has killed at least six people and sickened hundreds more in Asia.

The man is a resident of Snohomish County, Wash., who experienced symptoms after returning from a trip to the region around Wuhan, China, where the outbreak began. He was hospitalized with pneumonia last week, and infection with the coronavirus was confirmed on Monday afternoon.

Local officials declined to identify the patient, who was said to be quite ill. News of the first case in the United States comes amid growing evidence that the virus spreads from person to person, although it is not clear how easily.

A coronavirus outbreak in China is causing officials in the United States to screen at-risk passengers at three major airports in an effort to reduce the virus from spreading.

Chinese authorities reported there have been more than 300 cases of coronavirus and at least three deaths. Following the disease spreading outside of China’s borders, the World Health Organization (WHO) will conduct an emergency meeting on Wednesday to determine if the outbreak constitutes an international emergency.

Chinese authorities are trying to control the flow of people in and out of the eastern city of Wuhan, where a strain of the coronavirus was discovered last month. Wuhan’s mayor has asked residents to stay in the city to try to prevent the spread of the virus, which can cause respiratory symptoms such as pneumonia.

“Cars may be randomly tested in case wild animals, a potential source for the virus, are transported, and tour groups are prohibited from leaving the city,” NPR’s Amy Cheng reports from Beijing. Cases of coronavirus, named 2019-nCoV, have also been confirmed in Japan, Thailand and South Korea.