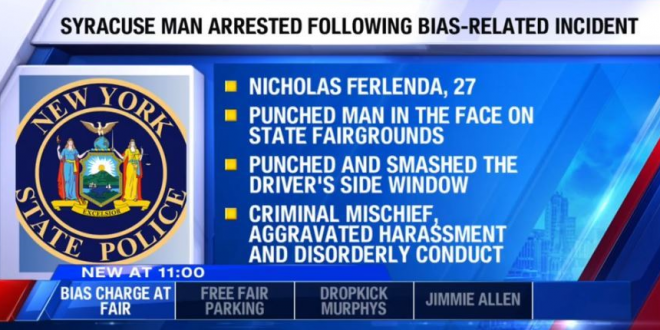 A couple were leaving a Breaking Benjamin rock concert during the state fair in August when one man slung an arm over his boyfriend.

That simple act triggered a hate-filled attack by a drunken stranger that included gay slurs, an unprovoked punch to the face of one victim and a shattered window to the car belonging to the other victim, authorities said.

Nicholas Ferlenda, 28, pleaded guilty Tuesday to two hate-crimes, assault and criminal mischief, for the Aug. 24 attack in the parking lot outside the amphitheater. Ferlenda’s antagonism lasted for at least half an hour, police said, starting with the punch and ending with the broken window as the couple waited to leave the parking lot.

Under the plea deal, Ferlenda will serve six months in prison providing he does not re-offend before his sentence begins. If he does, he faces up to eight years.