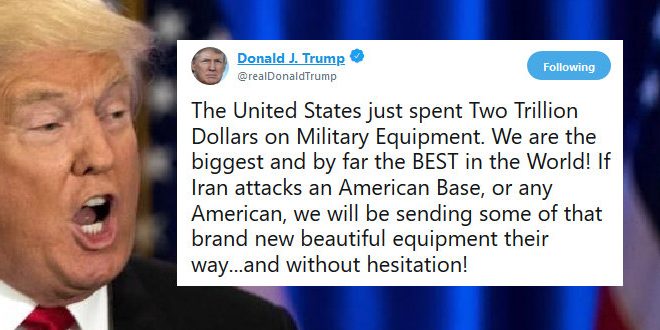 Trump Touts US Military Strength In Warning To Iran

President Trump early Sunday touted U.S. military strength in a tweet warning Iran against retaliation for the death of Gen. Qassem Soleimani, a top commander, in a U.S. drone strike. The message came as Soleimani’s body was returned to Iran, where thousands of mourners turned out for a funeral procession.

Trump late Saturday also warned that 52 Iranian sites had been targeted if Tehran strikes any Americans or American assets. Trump said the 52 sites were meant to represent the number of Americans held during the Iranian hostage crisis.

The United States just spent Two Trillion Dollars on Military Equipment. We are the biggest and by far the BEST in the World! If Iran attacks an American Base, or any American, we will be sending some of that brand new beautiful equipment their way…and without hesitation!

They attacked us, & we hit back. If they attack again, which I would strongly advise them not to do, we will hit them harder than they have ever been hit before! https://t.co/qI5RfWsSCH