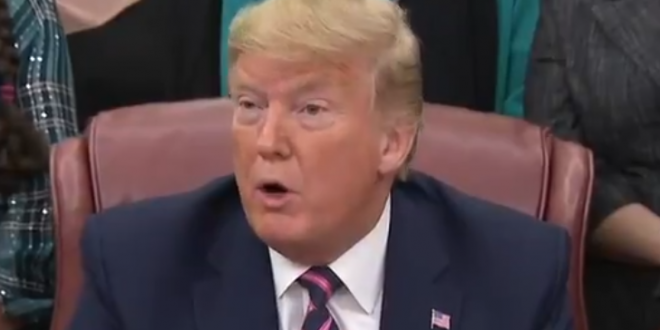 Trump: I Don’t Think I’ve Ever Spoken To Lev Parnas

President Donald Trump and aides sought Thursday to distance him from a Soviet-born businessman who said Trump knew all about efforts to pressure Ukraine into investigating U.S. political rival Joe Biden – a pivotal point in the Senate impeachment trial of the president.

“I don’t believe I’ve ever spoken to him,” Trump told reporters about Lev Parnas, taking questions after an event announcing new federal guidance he has said will “safeguard” the rights of students to pray in school.

Parnas said Trump knows him well and there are pictures of the two of them at various events. In an interview with CNN, Parnas said that every time Trump denies knowing him, “I’ll show him another picture. He’s lying.”

Trump said he didn’t know anything about Parnas, with whom he’s posed in photographs. “I don’t know him at all, don’t know what he’s about, don’t know where he comes from, know nothing about him. I can only tell you this thing is a big hoax,” he said, adding, “He’s probably trying to make a deal for himself.”

Trump said he takes thousands of photos at fundraisers, but suggested that did not mean he knows Parnas. “I don’t need the help of a man that I never met before other than perhaps taking a picture at a fundraiser,” he said.

“I don’t know him at all,” Pres. Trump claims of Giuliani associate Lev Parnas, “don’t know what he’s about, don’t know where he comes from, know nothing about him.” https://t.co/x0qsBbg4fK pic.twitter.com/Ydize81uTy

“I don’t know those gentlemen.”
– Trump
“He was aware of all my movements.I wouldn’t do anything w/o the consent of Giuliani, or the president.
Why w Pres Zelenskiy’s inner circle meet me? Who am I?They were told to meet w me. That’s the secret they’re trying to keep.”
– Parnas pic.twitter.com/PrCxB6YIky