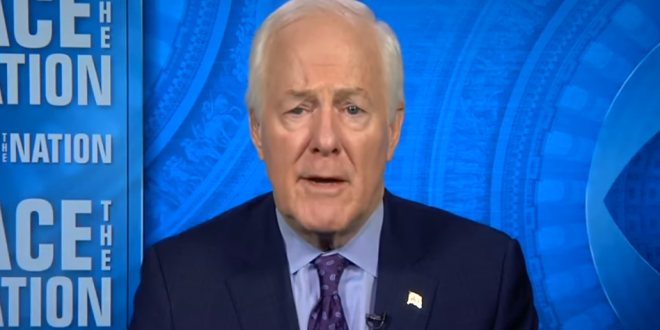 Sen. John Cornyn (R-Texas) on CBS’s “Face the Nation” Sunday dismissed new impeachment evidence obtained from Lev Parnas, an indicted associate of Rudy Giuliani, stating that there is “no question that there have been a series of grifters” who have associated themselves with the Trump campaign.

Parnas has claimed that the campaign to pressure Ukraine to announce an investigation into the Bidens was carried out with President Trump’s consent and awareness. “President Trump knew exactly what was going on,” Parnas told MSNBC last week.

Cornyn said, “Well, there is no question that there have been a series of grifters and other hangers-on that have associated themselves with the president’s campaign or claim to have special relationships with the president, but this is not the issue that the Senate is going to be deciding.”

Previous GOP Senator Shrugs Off Trump’s Extortion Of Ukraine As Just Mistaken Judgment: “The President Is Human”
Next Graham: Trump Wants Trial Over By SOTU Address