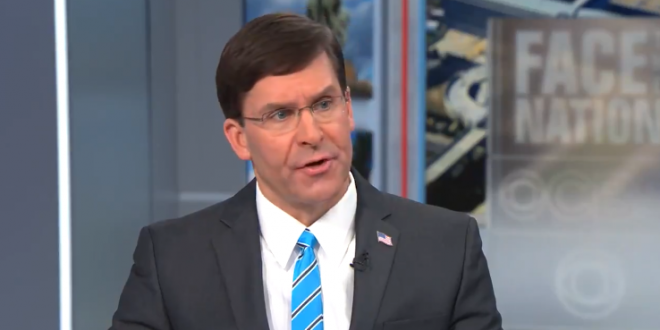 “The president didn’t cite a specific piece of evidence. What he said was he believed,” Esper said Sunday on “Face the Nation.”

“I didn’t see one, with regard to four embassies. What I’m saying is that I shared the president’s view that probably — my expectation was they were going to go after our embassies. The embassy is the most prominent display of American presence in a country.”

What we are hearing from the defense secretary this a.m. is that there is not specific intelligence showing planned attacks on four U.S. embassies. Esper says that’s his & the president’s belief, as he repeatedly points out Trump didn’t cite intelligence when he made that claim.

“I didn’t see one,” Esper tells @margbrennan about specific piece of intel backing up Trump’s belief that Iran planned to strike four embassies

What an astoundingly embarrassing “defense” of President Trump’s claim of bomb threats to four embassies.

“What the President said was he believed it probably could have been. He didn’t cite intelligence.”

They “believed” the embassies “could have” been targeted https://t.co/0GWLRxvh8L

Also, “I believe” that Iran “could have” attacked embassies ≠ imminent and specific threat. https://t.co/Kiz7vLeVjp