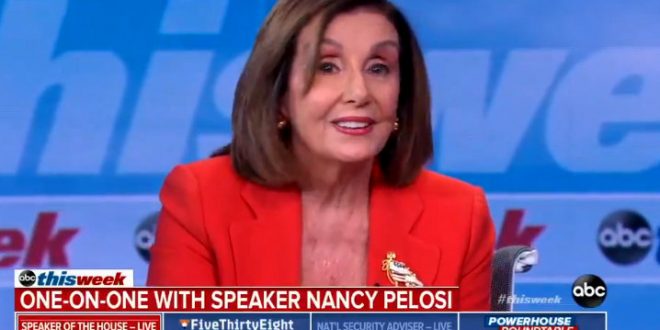 “Let me just say, it’s Sunday morning, I’d like to talk about some more pleasant subjects than the erratic nature of this president of the United States, but he has to know that every knock from him is a boost. He’s the president who said I should have impeached George Bush, because of the war in Iraq, and now he’s saying I’m obsessed. I held on this because, frankly, I said Donald Trump is not worth impeachment.

“He’s not worth it, but when he crossed that line on Ukraine he violated the constitution in such a way that could not be ignored. So again, I don’t like to spend too much time on his crazy tweets, because everything he says is projection. When he calls someone crazy he knows he is. Everything he says you can just translate it back to who he is.

“But again, it’s Sunday morning. Let’s be optimistic about the future, a future that will not have Donald Trump in the White House one way or another. Ten months we will have an election if we don’t have him removed sooner. But, again, he’ll be impeached forever.” – House Speaker Nancy Pelosi, responding to Trump’s latest “Crazy Nancy” tweets.

JUST IN: Speaker Nancy Pelosi responds to Trump’s tweets, telling @GStephanopoulos, “I don’t like to spend too much time on his crazy tweets because everything he says is a projection. When he calls somebody crazy, he knows that he is.” https://t.co/G6Ef3GUsED pic.twitter.com/8cWuCN8N8P

George @GStephanopoulos, ask Crazy Nancy why she allowed Adam “Shifty” Schiff to totally make up my conversation with the Ukrainian President & read his false words to Congress and the world, as though I said it? He got caught! Ask why hearing was most unfair & biased in history?