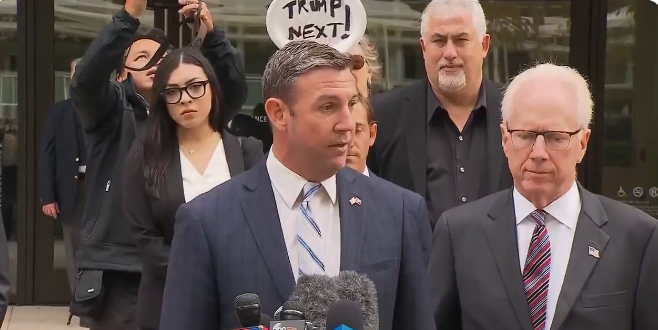 The House Ethics Committee notified Rep. Duncan Hunter that his recent guilty plea means he should no longer cast votes in the House. The instruction is not mandatory, but the panel threatened action against him if he continues to vote.

Hunter last voted on Wednesday, in favor of a measure to crack down on robocalls. He did not weigh in on any of the four roll call votes the House took on Thursday.

The California Republican pleaded guilty Tuesday to one count of conspiring with his wife, Margaret, to knowingly and willfully convert his campaign funds for personal expenditures. He faces a maximum of five years in prison; a maximum $250,000 fine; and a maximum of three years supervised release.

On Tuesday, GOP Rep. Duncan Hunter pleads guilty to conspiring to steal campaign funds. On Wednesday, he voted three times on the House floor. On Thursday, House Ethics sent him a letter barring him from voting. pic.twitter.com/AmzbsIDgJx

But convicted of stealing 100000s of dollars of campaign money for personal use: Remain a Congressman & decide whether or not to resign. 2 systems.https://t.co/4PIacEMgtv

When asked Wednesday about whether and when he intended to resign, [Duncan] Hunter blew off the question.