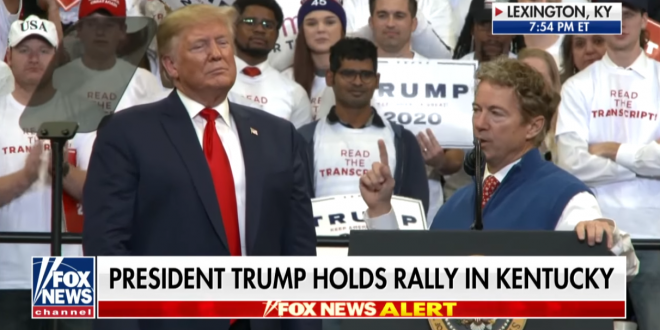 Addressing a packed arena in Lexington, Ky., Sen. Rand Paul (R-Ky.) claimed on Monday night that he knows the identity of the whistleblower whose complaint is at the center of the impeachment inquiry against President Trump. Then, Paul delivered a pointed message to the media.

“Do your job and print his name!” the senator yelled, prompting the crowd to raucously chant, “Do your job!” As the House Democrats’ effort to impeach Trump heats up, the president and his allies have fixated on unmasking the whistleblower, whose identity is protected by federal law, and the person’s alleged political motives.

But Paul’s comments drew intense criticism from many who accused him of putting the anonymous U.S. intelligence officer in danger, a firestorm that turned the senator’s name into a top trending term on Twitter with more than 63,000 mentions.

.@RandPaul: “We also now know the name of the whistleblower. The whistleblower needs to come forward as a material witness bc he worked for Joe Biden at the same time Hunter Biden was getting money from corrupt oligarchs. I say tonight to the media, do your job & print his name.” pic.twitter.com/1oUSrguDGV