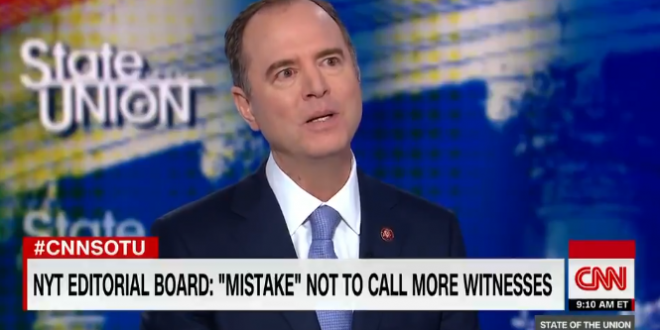 House Intelligence Committee Chairman Adam B. Schiff (D-Calif.) said Sunday that his panel will press ahead with its impeachment report even though key witnesses have not testified, in the latest signal that Democrats are moving swiftly in their probe of President Trump’s alleged efforts to pressure Ukraine.

In an interview on CNN’s “State of the Union,” Schiff said the evidence against Trump is “already overwhelming,” although he stopped short of saying whether he would support impeachment himself.

“Yes, we’d love to have these witnesses come in,” Schiff said. “But we’re not willing to simply allow them to wait us out — to stall this proceeding — when the facts are already overwhelming.”

Schiff also said Bolton should have the “courage” to testify like former National Security Council Russia expert Fiona Hill and others. And if he chooses not to testify, Bolton will have to explain to the country “why did he wait to tell” his story in his upcoming book rather than to the public “when it mattered.”

“We’ve certainly been in touch with his lawyer and what we’ve been informed by his lawyer because we invited him and he did not choose to come in and testify … is if we subpoena him, they will sue us in court,” Schiff said.

“Now, he will have to explain one day if he maintains that position why he wanted to wait to put it in a book instead of telling the American people what he knew when it really mattered to the country.”

Schiff on why Democrats aren’t waiting to call more witnesses: “We’re not willing to simply allow them to wait us out, to stall this proceeding when the facts are already overwhelming … We’re going to continue our investigation” #CNNSOTU pic.twitter.com/RpFk5fWuMF